The Finnish M39 rifle as a standard reference for evaluation of bolt action rifles.

Lets walk through the superb Finnish M39 rifle using our scoring criteria from the previous post. Letters in parenthesis represents evaluation points. This rifle is not scored.

The M39 is well balanced and easy to shoulder rifle. The main flaw of the M39 rifle is weight, this rifle is heavy at 9.5 pounds or 4.3 kilograms (a). In perspective a modern military carbine is about 3 kilos. Rifle length is 119 centimeters or 46.75 inches. The barrel lengths 68.7 cm or 27”. The barrel length is a healthy compromise between performance and maneuverability (b). The balance, comfort of the stock and cheek weld are excellent, the rifle has no sharp edges (c). There are several sling attachment points on the rifle allowing for varying methods of carry (d). The action is sealed against mud and snow, with no obvious points of entry. Sights have open protective ears that allow for rapid clearing of mud and snow, a very important feature (e).
Figure 1: The M39 rifle standing next to a 100 series AK. Bottom, the M39 rifle we tested. 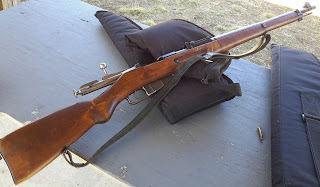 Conclusion: The M39 is an all around excellent bolt action rifle that is user friendly and ergonomic.

The locking of the bolt is in the front of the receiver, with dual opposing lugs. The bolt body acts as a third safety locking lug, in case of locking lug failure (a). The bolt is easy to operate due to the large bolt handle. The force to lock and unlock the bolt is minimal. Bolt travel is very smooth. The bolt however is slow to manipulate, due to long throw distance and the location of the bolt handle (b). Safety is present. Safety is hard to operate and is for marching and transport, not for combat use (c). The bolt can be re-cocked in the event of a misfire, without cycling the bolt (d). No gas escape hole is provided, in the event of a pierced primer the gas would escape directly into the shooter face, this is a bad, and is a design flaw (e).
Figure 2: The Mosin bolt overall, and disassembled.

Conclusion: The bolt design is typical of late 19th century, and does not account for "modern" tactics. The lack of an easy to operate safety in particular is a concern.
3: Firing

The M39 sights are excellent, notch and post type. The sight picture is fast to acquire, and provides good contrast. The sights are adjustable for both elevation (range) and windage. The range gradations are intuitive and easy to use. Large protective ears on both the front and rear sights, provide strength and improve sight acquisition (a).The M39 trigger is superb, being a crisp two stage design; this trigger is great for delivering accurate rifle fire (b). The trigger guard has plenty of space for use with gloves. However loading the rifle with heavy gloves on from clips is problematic. shooting with a gas mask is possible, but the sight picture is poor. (c). Reloading the five round magazine (e) is accomplished using a stripper clip. The clip is easily inserted into the receiver grooves, and must be removed prior to closing the bolt. Reloading can be performed fairly fast however, due to the rimmed cartridge care must be taken on how the cartridges are arranged on the clip to avoid rim lock, this is a flaw.  The magazine can be loaded without clips, a big plus (d).
Figure 3: M39 sight picture, safety is on.

Conclusion: The M39 is a "riflemans" rifle, great trigger, and logical easy to use sights.

Field stripping the M39 rifle is simplicity itself. Open the bolt, pull the trigger and remove the bolt. Remove the magazine lid by compressing a spring. Intuitive and tool free (a).  Bolt disassembly is again simplicity itself, all tool free, and very intuitive (b).  The bolt is only seven parts, six of which are easily removable in the field. The extractor should not be removed from the bolt head (c). The action can be fully accessible for cleaning by removing the bolt and the floorplate of the magazine. The floorplate is removed by compressing the spring, very easy. Reassembly is simply the reverse of assembly, and is simple intuitive and tool free (d). There are no small parts to lose. The only problem one can run into is that firing pin can be set flying if one is very careless, that’s about it (e).
Figure 4: The M39 bolt disassembled. Bottom, firing pin removal. 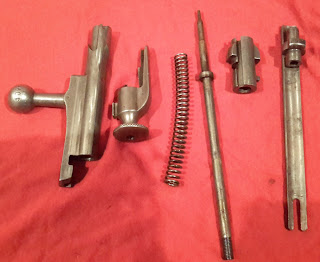 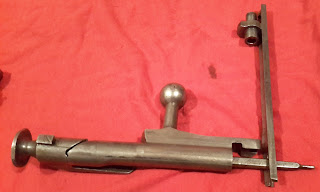 Conclusion: The Mosin rifle is a simple to use peasant proof design

The approximate total number of parts is 50-60, this depends on how you count (a). The most complex components that the M39 inherits from the M91 is the connector/guide rod in the bolt and the magazine as a whole. The complex components introduced by the Finns are the front and rear sight bases; they are milled and bored out, with some tough to machine shapes. The receiver of the Mosin rifle is fairly simple with only a few areas of difficult machining. A very interesting note about the Mosin receiver is that it is only partially heat treated in the front. This a great engineering solution to what in the 19th century was a very hard manufacturing problem (b). From a mass production and repair perspective, the magazine assembly as a whole with its mix of small springs and odd shapes presents a problem. The bolt design is a mass production / field repair shop dream. The separate bolt-head allows for easy repairs. Also the separate bolt head allows adaptation of the rifle to different calibers like .45-70 (Shameless plug for ourselves). Overall, and history proves this, the Mosin is a very successful easy to produce and repair design (c). The Cartridge 7.62x54r, was adopted for service in the Russian empire in 1891, it is still in active service in 2015. Without a doubt this is an excellent cartridge that has survived the test of times and is adaptable to many roles (d). The Finnish M39 rifle represents the final evolutionary branch of the bolt action rifle as the primary individual weapon. The rifle is a battle proven design, with great human engineering and ergonomics. Being of Mosin lineage, it’s a simple tool that can be issued to raw conscripts. At the same time the quality, attention to details, and modification applied by the Finns make the M39 what I would call a “Riflemans rifle”. What I mean by that is that a well-trained rifleman who knows his craft would not find this rifle lacking in any features necessary for effective use (Except for maybe the safety). Given the latter statement however it is also painfully obvious that the M39 is a boutique rifle of a small nation, and is in my opinion not scalable to mobilization and total war such as WW1.
Conclusion: The above gradation and discussion, should as I hope, convince you that the M39 is a good reference standard for future comparisons of rifles. The M39 is a post world war 1 modification of a ww1 rifle. Furthermore it is a rifle that was designed and built for a very capably army, with a long standing tradition of rifle marksmanship. The M39 is by no means perfect, but it is a reference.

Future posts: I spent much time debating how to approach the order in which we look at WW1 rifles. I want to avoid bias as much as possible. What came up with as a fair way to arrange the rifle reviews is in order of nations entering the war. We will start of with Austro Hungarian M1895 Steyr rifle in the next post.

Posted by phakophia armory at 12:21 PM

We are two home smiths (Chapaev and Voland) working on various gun building projects. This blog will show the progress of our trials and tribulations.